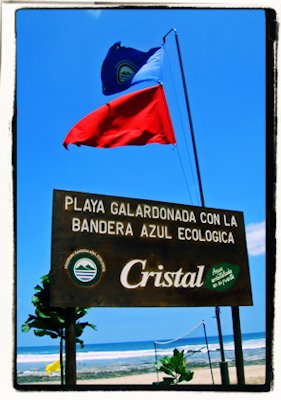 Among many other achievements, this Program received the National Prize «Contributions for the improvement of Life Quality» granted by the Ombudsman, for the 2003 public institution category.

The Ecological Blue Flag Program (BAE) was created as a response to the imminent danger of pollution at the beaches, and its repercussions on the public health and the tourism industry, completing this year its tenth year of existence, with a broader action range as of 2002.

The BAE Program is an inter-institutional effort, officialized by Executive Decrees # 25626-96, Decree # 31610 S-MINAE-TUR and Decree # 31648 MEP-MINAE-S-TUR, of February 9th, 2004, also participating the Costa Rican Tourism Institute, the Costa Rican Institute of Water and Sewage (A y A), the Ministry of the Environment and Energy, the Ministry of Education and the National Chamber of Tourism.

Besides being a program that achieves effort coordination of the involved institutions, it also enables citizen participation, since in order to particípate, the ProBAE committee mustbe conformed in the participating community and school, who implement the actions prometed by the Program, and on whom it will depend attaining the prize.

Thus, from 1996 to 2001 the BAE Program was focused to the country’s Coastal Communities, redefining its objectives for 2002, having demonstrated that it was the ideal means to achieve the communities’ hygienic-sanitary excellence, in such a way that the first ecológical flags were awarded that year to the first Non-Coastal Communities, and by 2004 new courses were proposed, with the Program’s launching to some country’s Public and Prívate Schools (preschools, elementary and júnior / high schools), now with the purpose of also promoting, the adoption by the education system of sustainable and environmentally friendly practices.