Costa Rica is small in size and has an area of roughly 51,100 square kilometers (31,682 square miles). Even so, it is internationally famous and recognized for the diversity and density of its natural resources and for the fabled kindness of its inhabitants. These facts set it apart as an especially attractive destination for foreign tourists who, not incidentally, make far more than a million visits a year. 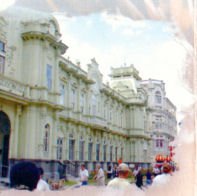 Anyone who wants to visit Costa Rica should contact the Costa Rican embassy or consulate in their country to determine the necessary documents they need to enter the country.

Costa Rica really has two seasons: a «green» or rainy season that runs from May to November and a dry season that begins in December and ends in April. The average temperature in the Central Valley is 72° F (22° C), while on the coast and at the beaches it ranges from 70° to 90°F (21°to 32°C).

The credit cards most commonly accepted by businesses and in tourist areas are: Visa, MasterCard, American Express, and Diners Club.

The country possesses three major airports. The Juan Santamaria International Airport is located in Alajuela 10 minutes from the capital, and the Daniel Oduber Quiros International Airport in Liberia, in the province of Guanacaste. In Pavas, just outside San Jose, there is the Tobias Bolaños Airport, which handles domestic flights. In addition, there are numerous landing strips that serve the various tourist destinations.

Visitors who want to enter the country by sea can do so at the ports of Limón and Moín on the Caribbean, Puerto Caldera and Puntarenas on the Pacific, and Central Pacific, Golfito, and Quepos on the Southern Pacific side.

River transport is possible on the Reventazón in the center of the country, the San Carlos, Río Frío, San Juan, and Sarapiquí on the northern plains, and the Grande de Terraba and the Sierpe on the Southern Pacific side. 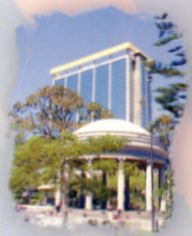 Costa Rica has an extensive network of roadways, mostly paved, that provide access to most parts of the country.

The national bus system provides comfortable, economic, and fast service to most parts of the country, especially to points of interest to tourists.

There is a broad offering of rental vehicles, due to the existence of many agencies that provide services to the international market.

Taxi service to different points in the country is modem, efficient, and safe, although it is advisable that you only use the more well-known companies. 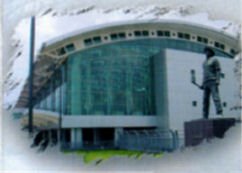 Costa Rica enjoys one of the oldest and most stable democracies in Latin America. This stance lead to its abolishing the army in 1948 and to earning a Nobel Peace Prize for president Oscar Arias for his ongoing struggle to approve the Central American Peace Plan during the turbulent eighties. The Costa Rican political system is a representative system with three branches: the Executive, the Legislative, and the Judicial. The president is elected by popular vote every four years.

Thanks to its free, yet mandatory public education system established in 1917, Costa Ricans enjoy a high level of education and one of the highest literacy rates in the world: 96.2%.

This high level of education, along with the development of telecommuncations, has contributed to Costa Rica being considered as a place suitable for foreign multi-national high-technology investment by companies. Intel Corporation, Laser Sight Technology, Siemens, Procter and Gamble and others all have a presence in Costa Rica. 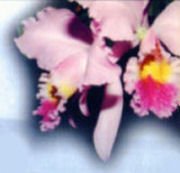 Telecommuniation services are provided by the Institute Costarricense de Electricidad (ICE-the Costa Rican Institute of Electricity), a state-owned body. The modern telecommunications network includes: direct communications with the outside world by the self-dial MIDA international telephone system. There are also telex, telegram, fax, cellular, and Internet services, along with data transmission via the use of satellites and microwaves.

The majority of cities in the country have drinkable water, although in the more remote areas it is recommended that you drink bottled water.

Costa Rican cuisine offers a wide variety of choices to the tourist, ranging from the freshest tropical fruits and vegetables to exquisite seafood and indigenous foods such as «gallo pinto» («spotted rooster») consisting of rice lightly sauteed with beans and served with a steak or eggs. Costa Rican dishes also include tamales, arroz con pollo (rice with chicken), minced arracache root, potato and meat hash, and «casado», a «marriage» of portions of rice, beans, ripe plantains, fresh vegetable salad and some sort of meat. The list goes on to include grilled corn on the cob, «chorreadas» (a thick johnny cake made from tender com), and different types of empanadas (turnovers) filled with cheese, beans, or meat.

In addition, if a visitor so desires, he or she may try other cuisines, such as French, Italian, German, Korean, Chinese, Spanish, Mexican, U.S., and vegetarian, all of which are well represented in the country. 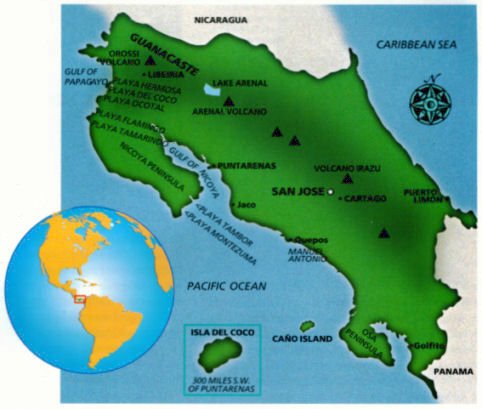 Just as tourist tastes are varied, so are the tourist attractions that Costa Rica offers in the form of natural beauty, sun and sea, hospitality, history, adventure, and fun. All these attractions are concentrated in a small area where distance does not present a problem.

Although taking a vacation in a beautiful country in and of itself contributes to good health, there are other options available as well. The country offers high-quality professional services in plastic and reconstructive surgery, opthalmology, and dentistry at very good prices compared to other countries. In the same area as tourist health, we should mention that Costa Rica has natural hot spring bathing. There are also therapeutic treatment destinations with volcanic muds and other natural components that have earned the special interest of many visitors. 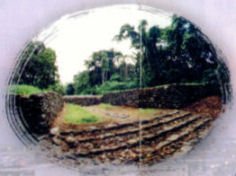 In Cartago there are sites of interest such as the Orosi Church and the ruins of the Ujarras Church.

Anyone with a flair for archeological sites should visit Turrialba in Cartago Province to see the Guayabo National Monument. 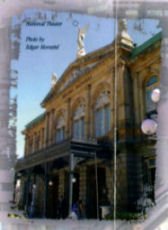 If natural beauty is what the visitor is looking for, there’s no place like Costa Rica. Its most valuable treasure lies in the protected areas encompassing the Poás, Irazú, Arenal, and Rincón de la Vieja (the Old Lady’s Corner) volcanoes, the Manuel Antonio and Cahuita beaches, the Carara and Braulio Carrillo forest trails, the dryland forest at Santa Rosa, the submarine life at the Coco and Caño islands, and the Chirripo Mountains. Each of these parks is a living center for bio-diversity that offers exactly the right conditions for a tourist to truly live a wildlife experience. As an eco-tourist, you can participate in the local communities that both benefit from such activities and contribute to the preservation of the environment’s natural resources.

Some 25% of the national territory lie in protected areas governed by strict standards and regulations about public usage. Such communities as Monteverde in Puntarenas Province, Puerto Jimenez on the Osa Peninsula, Tortuguero in Union Province, Fortuna de San Carlos in Alajuela Province, and Sarapiqui in Heredia Province are all pioneers in the area.

These areas are all famous for their local micro- and small businesses that interact with the natural environment in a, constant effort to reinforce the region’s cultural values.

Costa Rica maintains a policy of sustainability that has molded its image as an ecological destination at the forefront of numerous other countries in Latin America which follow its own special model. 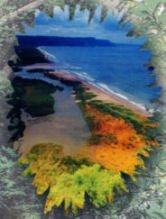 In a small country that Mother Nature I abundantly blessed, the number and beauty of the beaches are no exception. Some beaches are part of the national park system which adds a new ingredient to their attractiveness. This is because enjoying them is not limited just to their warm temperatures. You can enjoy the beauty and exuberance of the tropical countryside as well.

Although some natural rocky formations are as beautiful as and look the same as any other mountain, some bubble and boil inside.

You should enjoy Costa Rica’s volcanoes, but judiciously. Among them, Arenal is active and at night shoots off natural fireworks. The dormant Irazu Volcano offers breathtaking views and the inactive Poas Volcano has the largest crater in the world. 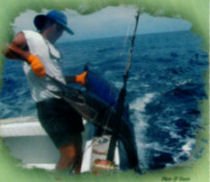 Sport fishing is an outstanding attraction found on the coasts of both oceans and at the lake at Arenal Volcano and in some rivers. Costa Rica is well-known throughout the world for the richness and diversity of the species inhabiting our waters, such as marlin, sailfish, huge tunas, rooster fish, and snapper on the Pacific, and snook, sea bass, mahimahi (dolphin fish), and snapper on the Atlantic side. 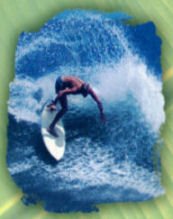 It’s no accident that our country has become one of the primary destinations for surfers. The easy access to the oceanside and the variety of surfing types found in Costa Rica are very attractive to lovers of the sport. Surfers have discovered a country with four different areas on the Caribbean and the North, Central, and Southern Pacific coasts for the best in surfing.

Few places in the world have such a profusion of submarine beauty as is found in the waters of the Caribbean Sea in the east and the Pacific Ocean in the west. This beauty makes Costa Rica one of the most attractive destinations for snorkeling and diving. This, in turn, has triggered the formation of dive centers where you can rent equipment and organize tours and other similar activities. 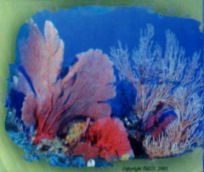 The most beautiful areas are found around the Coco and Cano islands, but because of their distance and variety of species inhabiting them you need special permits and transportation to get there. The Papagayo Gulf in Guanacaste and the southern Caribbean also are noteworthy because of the large number of coral reefs and fish that dwell among them. 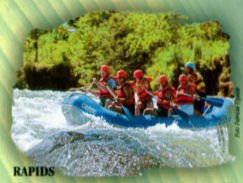 The rivers in Costa Rica are not only beautiful stopping off points with wonderful fishing, they have also become famous for their rapids. Here the visitor can slide through their serpentine currents with professional equipment and guides in each raft and enjoy the white water rafting of the rivers Reventazon, Pacuare, General, or Corobici to the utmost.

The biggest challenge for a convention and meeting organizer is choosing the right places for his or her clients. In this field Costa Rica is particularly attractive because it offers all the necessary infrastructure as well as facilities and services that are always accessible at a reasonable cost. Costa Rica has very high-capacity sites for these types of event in the Central Valley and on the Papagayo Gulf. 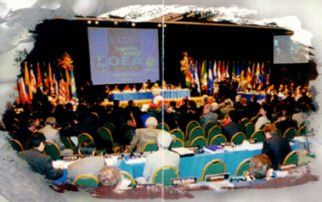 • In the western hemisphere, Costa Rica is the only country without an army or military of any kind.

• At birth, Costa Ricans have a life expectancy of 76 years.

• The Costa Rican Social Security Service is intended to cover 100% of the population. Currently 90% of the inhabitants are members and the rest are covered by the federal government.

• Because of its geographical location, Costa Rica is a place that bridges the northern and southern most points of the two American continents. This results in the meeting of a variety of cultures and a density of flora and fauna said to be unlike any found in any other country in the world.

• Costa Rica is one of the countries with the largest amount of protected land in the world; 25% ,of the national territory is dedicated to the national park item or biological, marine, land reserves, as well as other natural wildlife areas.

• Costa Rica has on the order of 850 bird species, 600 of which are non-migratory. The others migrate during the North American winter, stopping over in Costa Rica before continuing on to South America.

• Costa Rica has a Sustainable Tourism Certification (STC) program whose goal is to classify and certify tourism companies based on how well their erations match a «sustainability model.

• The best tourist beaches in Costa Rica have won the Ecological Blue Flag which ensures hygenic/sanitary and proper management conditions. 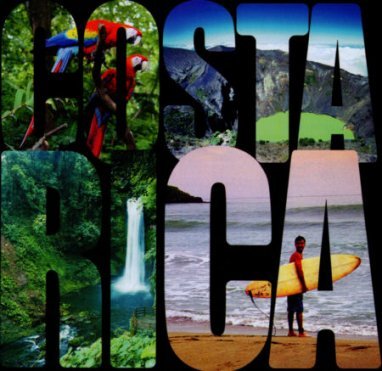