With an approximate area of 46.6 square kilometers, surrounded by 24 kilometers of coastline and located two hundred and seventy miles Southeast of Costa Rica; Cocos island boasts of the exuberant vegetation which is typical of the tropical rainy climates. The high level of rainfall generates abundant rivers of fresh and crystalline waters that cascade into the sea in waterfalls of extraordinary beauty.

A rugged coastline full of steep cliffs makes of the island a nearly impregnable fortress which rises over 100 eters above sea level. The only points of access are its two bays: Chatham Bay and Wafer Bay, which are separated from each other by the «Presidio» Peninsula. Mount Iglesias which reaches an altitude of 660 meters over the sea is the island’s highest peak.

Since the island is first mentioned in 1541 in Nicolás Desliens cartographic map, it is assumed that it was discovered before that date. Nevertheless, its exact date of discovery is not known. In Desliens’ map it is identified as «Coques» (Inst. Geog. of C.R., pp. 33., 1964). It is said that the island owes its name to the abundance of coconut palms and fruit. A captain by the name of Colnett mentioned having loaded 2000 coconuts onto his ship on a visit to the island in 1793. 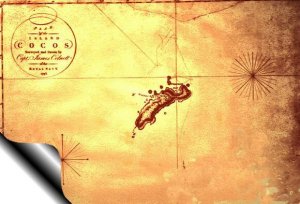 During the XVI, XVII, and XVIII centuries, the island served as refuge for pirates and whalers, and the occasional military reconnaissance mission. The pirates used to scour the American coastal waters, looting the Spanish ships of their rich cargoes which they subsequently hid before disposing of them. This has fueled the legend that on the island there lie hidden, great treasures just waiting to be discovered. Among some of the most notorious pirates which are said to have used the island as a refuge and supposedly buried their treasures there are Captains Morgan, Edward Davis, and William Thompson. This is not really too likely since the pirates were all English, Dutch or French and they would have had to sail around the tip of South America to get to the island; a rather long and unlikely trip just to hide a treasure. To return to Europe, they had to go down all the way around Cape Horn; this trip could take years.

In spite of the above, there is a story that apparently justifies the theory of the existence of a treasure in the island. It begins in the year 1820 in Perú, in the city of Lima, to be specific. At that time, Lima was the site of a revolution and the Spanish authorities decided to protect their treasures by loading them aboard a ship in which they could take their riches with them should they have to sail away. Unfortunately for the Spaniards, Captain Thompson was put in charge of safeguarding the ship and he simply took off with the booty sailing to Cocos island where he supposedly buried it. According to the story, he had to bury the treasure because the Spanish «armada», once the revolution was under control, went after him.

Towards 1869, the then Costa Rican president Jesús Jimenez ordered the island formally included as part of Costa Rica’s territory. For this, he organized an expedition headed by don Rafael Oreamuno, who raised the Costa Rican flag for the first time on the island. Later, during the administration of Tomás Guardia it was used as a penal colony for political prisoners (1876-1882), (Inst. Geog. de C.R., Pag. 108, 1963).

In 1889, Augusta Gissler arrived in Cocos island and was named Lieutenant Governor between 1897 and 1906. 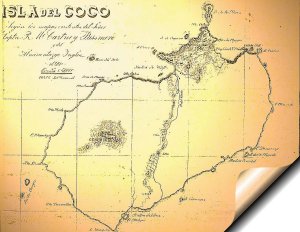 Gissler, who devoted 18 years of his life to hunting the treasure, is the personification of the search for the treasure in the island. Reportedly, in Hawaii, he met a man named Old Mack, who was said to be the grandson of one of the survivors of the looting of Lima.

On the basis of that story, Gissler never desisted in his search for the treasure, but to this day, no positive results have ever been forthcoming.

In spite of this, there is an oral tradition about a man named John Keating who was able to find the treasure hidden in the island and take part of it. Mr. Keating was a wealthy industrialist who, on his death bed, told his family of his experience on the island after a shipwreck, and how he was able to locate the treasure and rescue part of it (Raul Arias, UCR, 1995).

Today, there is widespread belief that there really is a great treasure buried in the island. Around the turn of the century, it was reckoned to be in the neighborhood of one hundred million Dollars. Be that as it may, the truth is that the island’s greatest treasures are its tropical beauty, its paradisiacal waters and its exuberant flora and fauna which have earned for it the status of PATRIMONY OF HUMANITY.